Two and a Half years. 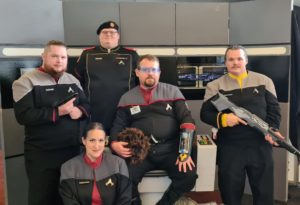 It has been two and a half long years since the officers and crew of the USS Animus had been able to gather together in any sizable number. Now at the tail end of 2019, before our Patrol Sector became beset by the devastating cataclysm of the Black Summer Fires which rendered any outdoor venture a futile gesture in the occasional sporadic sojourn, the gasping smoke was quickly replaced by flooding rains that seemed to show no signs of stopping, only to be impacted by the slow burn of a viral outbreak in Wuhan China.
While it took time for the COVID-19 Pandemic to reach our Patrol area, after it had effectively drydocked both our sister ships the Southern Cross and Tydirium earlier in 2020, when it did finally breach containment lines 305 days later, it did so with devastating effect on the Animus. While we had been spared the initial wave, we watched as one after another event was postponed, and rescheduled before finally being cancelled. We watched as venues we had previously patroned closed first by government decree, then by financial difficulty.

It was when the Command Staff, became cut off from the rest of the crew when the ACT Government closed the border that the isolation suddenly started to set in, we specifically felt that separation, our families were caught between the Sydney ring of steel and the iron border of Canberra.
So, finally, after two and a half years, dust off the layer of ash and cobwebs off our convention display, and place it in a position of pride at GammaCon 2022, conversely, the last event this display was used at was GammaCon 2019 felt cathartic, and almost, like home. Though the group we were back in 2019 is not the group we are in 2022, I am proud to say that we have weathered the storm thus far, and we will continue to weather the storm as it flows around us.